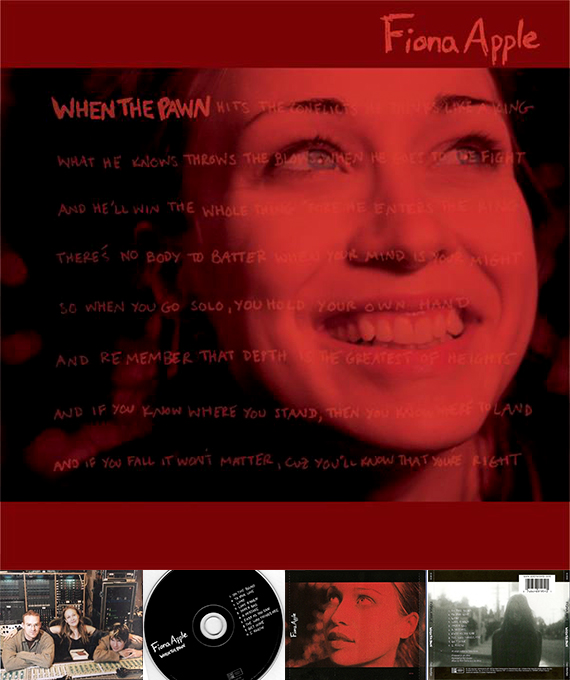 🍎 Fiona Apple's When The Pawn... was released 18 years ago on November 9th 1999 when she was only 22 (your faves could never). It was a remarkable artistic leap in songwriting and sound that saw Fiona coming into her true power. She worked along with producer Jon Brion to refine and expand her musical horizons. She was more confident and uninhibited in her delivery laying her guts out unapologetically. The result was a resonant, sophisticated and fearless work that's just as poignant today. This is an album you can sing/scream with from beginning to end, and feel ultimate relief and healing.

🍎 With Tidal, Fiona thought she would tell her story and people would finally understand her, but her experience with fame was the polar opposite as she was wildly misunderstood and felt unaccepted. Misogynistic journalists mistook her honesty and projected their ugliness onto her: 'bruised fruit', 'insufferable', 'self-indulgent', 'pretentious' and a 'sad brat with no sense of humor' are a few quotes from magazines from that time. Her "Criminal" music video got a vicious reception, and the response to her MTV Awards Acceptance Speech (which spoke nothing but truth!) was even harsher.

"I just had something on my mind and I just said it.
And that's really the foreshadowing of my entire career and my entire life.
When I have something to say, I'll say it" ~ Fiona Apple.

🍎 The title of the album was inspired by this negativity:

'I'd been on the cover of Spin magazine, and they really spun it to be like that I was a crazy little sad loose cannon girl. Very unlike me, I opened up the magazine and I was so stupid I looked at the letters that people wrote in and not one was good. It was all people talking about how annoying I was, how crazy – it was just terrible stuff. I got so sad but there was no way for me to curl up in a ball and die because we had to go out on the road. So I tried to give myself a little pep talk.' 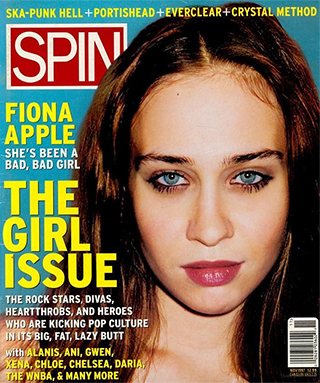 🍎 The pep talk was a 90 word poem that would turn into the album title years later. It was in the Guinness book of world records up until 2007. One hit wonder Chumbawumba ("I Get Knocked Down") holds it now with a lame 156 word album title.

'When the pawn hits the conflicts he thinks like a king
What he knows throws the blows when he goes to the fight
And he'll win the whole thing 'fore he enters the ring
There's nobody to batter when your mind is your might
So when you go solo, you hold your own hand
And remember that depth is the greatest of heights
And if you know where you stand, then you know where to land
And if you fall it won't matter 'cause you'll know that you're right.'

Fiona took all the mean and made the most of it because she's an extraordinary machine:

'I lost it for a while because I was so intimidated by the whole situation I was in, and so disappointed by it also. But I've got it again. For a while I kind of followed what anybody said about me--followed that and was that because that's what I thought they wanted me to be. Now I know what I know.'

• The idea for "Paper Bag" was born back when she was recording Tidal. She was in the car in a grocery store parking lot, sulking and looking outside her window, when she thought she saw a dove. She swung up into a high, but upon further inspection it turned out to be a plastic bag, and Fiona took it as a symbol for her life. Years later, she pulled that memory out of her head, changed 'plastic' to 'paper', and wrote this classic song.

• A guy she was seeing called her his crowbar because she 'opened the door to changes in his life'. Fiona sings about waiting patiently outside that door in the beautiful and heart-wrenching "I Know".

She talks about "Paper Bag", & "I Know" at the beginning of this video.

• "When I was sequencing the album, I was thinking about the amount of hope in each song," Apple admits. She also recalls cataloguing the album's ever-shifting perspective on relationships: "Don't try it . . . Okay, try it, please . . . Okay, we tried it, it failed . . . Please, one more chance . . . I'm not going to give you one more chance . . . I'm going to go fuck something up on purpose."

🍎 The album was critically and commercially successful and was certified platinum. Although some of the initial attention was focused on the title, people soon realized that she was a genius. The record earned a Grammy nomination for Best Alternative Music Album but lost to Radiohead's Kid A. In 2010, Spin magazine named the album the 106th greatest of the last 25 years. A year later, Slant Magazine named it the 79th best album of the 1990s. It produced 3 singles "Fast As You Can", "Limp" and "Paper Bag" - all music videos were directed by her then-boyfriend, film director Paul Thomas Anderson.

🍎 In Conclusion, When The Pawn... is a timeless masterpiece just like everything she's released.
There will never be another Fiona Apple, and we are not worthy.

🍎 Fiona already has a lot of songs done for her new album that's expected to be released next year, 6 years after The Idler Wheel... She recently performed "Fast As You Can", and it sounded better than ever:


Sources: So be it I'm your crowbar.
Listen: Spotify, YT, iTunes.
ONTD, how do you feel about When The Pawn...?