Molly Ringwald on Being Sexually Harassed as a Child Actress 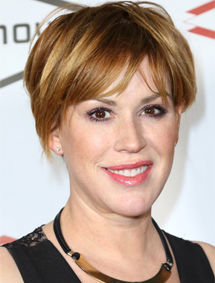 "I have had plenty of Harvey Weinsteins of my own over the years," @MollyRingwald writes: https://t.co/89wTtDNv0I pic.twitter.com/kS5DgUBr8e

* When she was 13, a crew member on a set offered to teach her to dance and then pushed against her with an erection

* At 14, her married director stuck his tongue in her mouth on set: "At a time when I was trying to figure out what it meant to become a sexually viable young woman, at every turn some older guy tried to help speed up the process."

*In her early 20s, a director in an audition had her co-star, an actor on whom she had a crush, put a dog collar on her while she said her lines even though it wasn't in the script and had nothing to do with the story; she sobbed in the parking lot afterward and left Hollywood for Paris soon after

* In a Movieline article about her: "the head of a major studio—and, incidentally, someone who claims himself to be horrified by the Harvey allegations—was quoted as saying, 'I wouldn’t know [Molly Ringwald] if she sat on my face'. I was twenty-four at the time.”' (OP's note: This was Jeffrey Katzenberg)