Riverdale Roundup: Serpents, Speculation, Sabrina, and Some Other Stuff

Fangs Fogarty is an antagonistic character from the Lil Archie line. Maybe the show will subvert his role, or maybe he'll be a straight up dick.

Thanks to the cast's addiction to posting IG stories on set, and crew members hashtagging stuff they do on set (particularly with #barchie ,lol), it looks like Betty and Archie get into some dirty stuff in the midseason finale 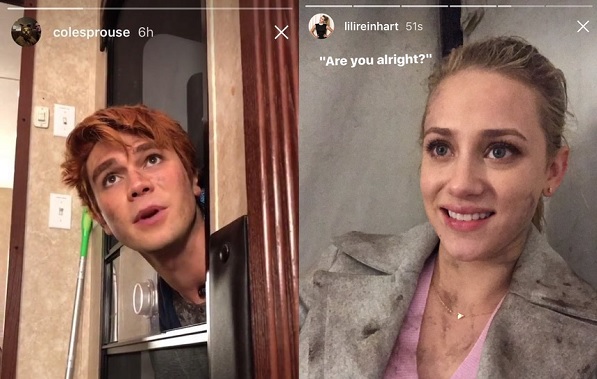 Episode 10 aka the start of Season 2B. The first title of this season to not be associated with a horror movie. Mind you that this is written by the pair that wrote Jughead's birthday episode. There's already early speculation that either budget cuts or Southside High burning down will force the two student populations to merge

The Red Queen returns in all her glory in #Riverdale episode 210… You ready, @madelainepetsch? pic.twitter.com/UyIbV3PlTq

Casting is underway for both Sabrina and Betty's long lost brother. So they're not showing up until the second half of the season.

In case you didn't know, Sabrina already has her own spin-off set for the 2018 tv season so they're not just casting for a recurring character but the lead of a new series. There are no rumors yet as to who's being considered or who's auditioned. Dove Cameron of the Disney Channel seems to be a popular fancast as well as Sabrina Carpenter.

Chic Cooper (or whatever his last name will end up being) will be a recurring character. It's now known in what capacity he'll show up though I won't be surprised if RAS figures out this is his chance to have an Agent Cooper on the show