Remember Herman Cain? For some reason this former GOP candidate has unrelated Twin Peaks stills as the header image for his news items. 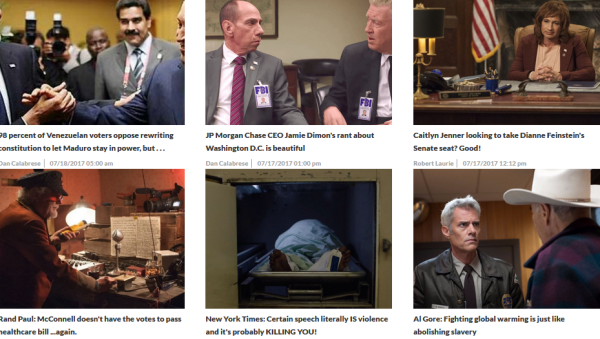 Turns out the answer is as simple as the editors of his site being fans of the show even if Cain has probably never watched it.

“We’ve done things like this before where we use certain kinds of photos in a given day,” Calabrese said, “mainly just to amuse ourselves and have fun with the questions. One day last year we did a Phil Collins photo day and the comments were pretty funny. We decided on Friday that we would do ‘Twin Peaks’ photos [on Monday].”

“The way our site works is Herman, Rob and I all generate our own content, and we choose our own photos,” Calabrese said. “Herman doesn’t have to approve every piece that runs… and he trusts us to make decisions about content day-to-day, including the occasional gag just to keep things light. I forgot to tell you about the day we did all Obama-in-a-cowboy-hat photos. That was real popular. Not.”

source/source
what photos would you post on your work site if you could get away with it?
Tags: politics, television - showtime
Subscribe