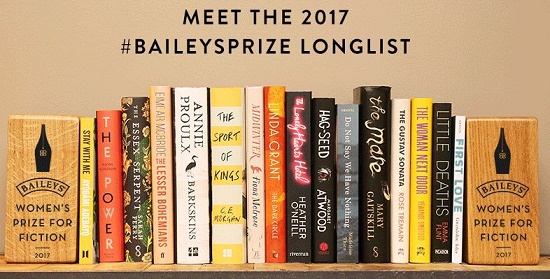 In the past few days several major literary awards have revealed their longlist or shortlist. We have the Baileys Women's Prize for Fiction longlist, the Man Booker International longlist, the Orwell Prize for Books longlist and the Wellcome Prize shorlist. Get ready to make your TBR list even longer.

The Man Booker International Prize is awarded annually for a single work of fiction, translated into English and published in the UK. Both novels and collections of short stories are eligible.

The Orwell Prize for Books 2017 longlist

The Orwell Prize is Britain’s most prestigious prize for political writing. Every year, they award prizes for the work which comes closest to George Orwell’s ambition ‘to make political writing into an art’. The Book Prize is for a book or pamphlet, whether fiction or non-fiction, first published in the calendar year preceding the year of the Prize. For example, the Orwell Prize 2017 is for work first published in the calendar year 2016. ‘Political’ is defined in the broadest sense, including (but not limited to) entries addressing political, social, cultural, moral and historical subjects.

The Power by Naomi Alderman
Citizen Clem by John Bew
The Seven by Ruth Dudley Edwards
The Return by Hisham Matar
Black and British by David Olusoga
The Life Project by Helen Pearson
Easternisation by Gideon Rachman
All Out War by Tim Shipman
The Marches by Rory Stewart
Island Story by JD Taylor
And the Sun Shines Now by Adrian Tempany
Enough Said by Mark Thompson
Cut by Hibo Wardere, in collaboration with Anna Wharton
Another Day in the Death of America by Gary Younge

The Baileys Women’s Prize for Fiction is the UK’s most prestigious annual book award for fiction written by a woman. Founded in 1996, the Prize was set up to celebrate excellence, originality and accessibility in writing by women throughout the world.

We are delighted to announce the #WBP2017 shortlist. Congratulations all! https://t.co/70eNTDGxMv pic.twitter.com/wj2kqgIOZ1

The shortlist comprises four non-fiction and two fiction titles, including the first posthumously published title and the first translated title to be shortlisted for the prize. The six exceptional books engage with the topics of health and medicine and the many ways they touch our lives.