Tamara Duarte joins the cast for S2 and was at ClexaCon with Emily Andras, Katherine Barrell and Dominique Provost-Chalkley, though Andras wouldn't reveal anything about her character.

[Spoiler (click to open)]
* After the show was nominated for a GLAAD Media award last year, Andras tweeted that she was going to “make things gayer” in Season 2. When asked at the panel just how gay they were now that most of Season 2 has been written, she joking asked the crowd “How gay do you want it to be?” After a resounding set of cheers and applause, Andras added that “it can always get gayer.”

* You'll get more about Nicole's backstory and she may not have the same sunny disposition- things this season get a little more frustrating, a little more upsetting for her. Katherine Barrell got a haircut for S2 because she wanted her character to be sexier and be able to let her hair down a bit. Katherine is shooting a scene wit Melanie (Wynonna) and it's one of the favorite scenes this season that she's read, she loves working with Melanie. Wynonna will be very protective of Waverly when it comes to WayHaught, isn't sure if anything is good enough to date Waverly, while Nicole may have some opinions about Wynonna too.

* Waverly has an insane season, every week is like ‘what’s Dominique’s special skill this episode?’ Dominique has many talents which she gets to showcase this season.

* Even though Doc is old fashioned, he’s not easily shocked or offended, he's a ‘love is love’ kind of a guy. He has some really fun relationships this year with people that are unexpected.

Also from ClexaCon (and from the link in the previous tweet), here's a poster for S2: 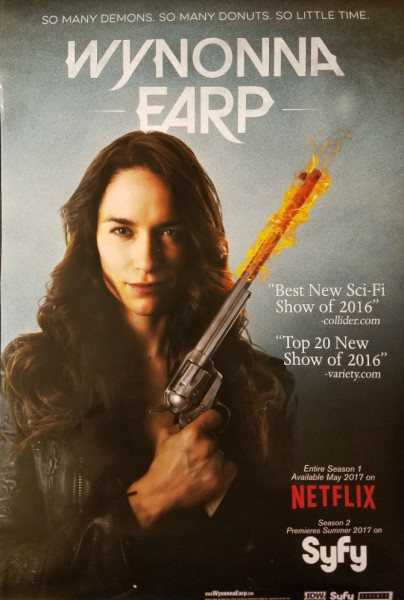 Wynonna Earp herself, Melanie Scrofano, is teaming up with Beau Smith to write a Wynonna Earp comic (second castmate to do so, after Tim Rozon)

Here are a few cute BTS pics for filming S2.