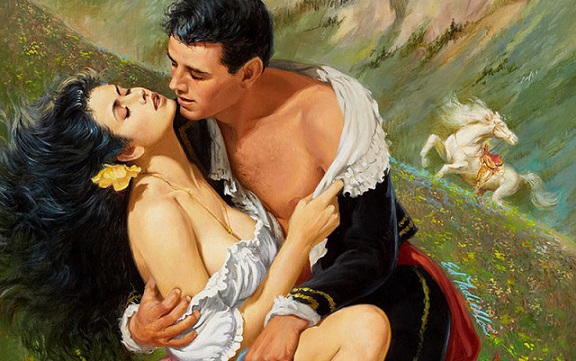 Creeped out by Edward Cullen and Christian Grey? You ain't seen nothing yet. Finding a healthy relationship in fiction can be even harder than in real life. Join me in the PITS OF DESPAIR as I talk about some of the most horrifying plots in romance novels by popular authors... 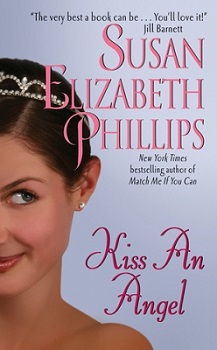 When Daisy's mother dies, she is in a lot of debt and ends up facing jailtime for passing a bad check, so her father tells her that he'd pay her debts and give her a trust fund if she'd marry some guy of his choosing, and stay married for six months. Because... that's normal. Anyway the dude, Alexander, ends up being a circus manager (and also a lost Romanov, because of course he is), and a fucking MONSTER.

They begin their marriage with Alexander warning Daisy: "In case you haven't figured it out by now, this isn't going to be one of those modern, talk-things-through-so-we-can-compromise marriages like you read about in all those ladies' magazines. This is going to be an old-time relationship. Now what that means, angel face, is that I'm in charge, and you're going to be doing what I say. If you don't, you're going to suffer some pretty unpleasant consequences".

He isn't kidding. Alex expects Daisy to cook and clean for him, and when she tries to say no, Alex puts his hand around Daisy's throat as if to choke her and says "Listen to me, angel face. We can do this easy, or we can do it rough. Either way, I'm going to win. You decide how it'll be". Are you swooning yet? He also threatens Daisy with a whip, several times. Alex literally says he does not respect Daisy as a person and that he does not consider their marriage to be real, however when it comes to demanding sex he says "we're legally married, and it's only natural". It gets worse. He rapes her while she's asleep (of course she's a 26-year-old virgin, I hope you didn't think she was some kind of SLUT!) and Daisy gets pregnant, and he tries to force her to have an abortion. He literally whips her in a violent rage while she's pregnant. She tries to leave, but then he decides that he "loves" her and won't allow her to leave him, so he blackmails her into staying. Happy ending! 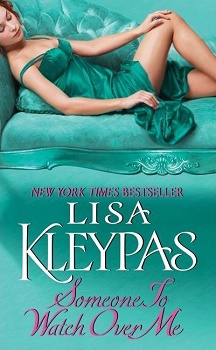 Someone to Watch Over Me (Lisa Kleypas, 1999) - "Old-timey cop wants to revenge-rape a courtesan because she spread a rumour about him. He gets his opportunity when he finds her after a murder attempt, battered, nearly drowned and amnesiac. But twist! It was her virgin twin all along!"

The hero is like an old-timey police officer, and he's mad at some courtesan who spread a rumour that she rejected him. One day she's attacked, beaten, nearly drowned, and gets amnesia, so instead of putting that tiny slight in perspective and doing his fucking job which is to find the would-be murderer, he thinks it's the perfect opportunity to punish her: he takes her to his house, ostensibly to protect her, but really he wants to fuck her for revenge (??). He wants to "teach her a lesson", "take her down a notch" and "put her in her place". "He was going to use her, the way she had used so many men. It was time for Vivien Duvall to receive her reckoning." Basically his plan is to tell her they are in a relationship, rape her by deception, and then reject her. Sounds sane, right?
So after some shenanigans they end up having sex (the aforementioned rape by deception) but then he realises that she was a virgin (and actually the courtesan's "good girl" twin sister) and he feels bad because he was TRYING to trick and humiliate a PROSTITUTE, not a RESPECTABLE virgin, GOD!! I mean, he's not a MONSTER!! 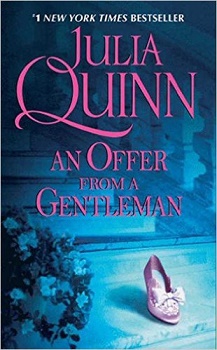 An Offer From a Gentleman (Julia Quinn, 2001) - "Rich guy saves serving-girl from gang-rape, tries to turn her into a prostitute instead"

This charming book is a retelling of Cinderella, if Prince Charming had taken a look at Cinderella and asked her "how much?" and then gotten really mad when she said she wasn't a prostitute, because she should be like, honored to fuck a guy like him and still get paid to do it.

Sophie is a bastard daughter of a nobleman, so living with that stigma, she vows that she will never have sex out of wedlock because she doesn't want to have a bastard of her own. She works as a serving girl, and one day a visitor saves her from being gang-raped by her employer and his guests. He takes her to her house, gives her a new job, etc, and soon enough he decides he wants to fuck her. So he asks her if she wants to become his "mistress", basically get paid to fuck him at his convenience, because he definitely can't marry someone as lowly as her - think of all the parties he wouldn't be invited to anymore! Nah, he has to marry someone of his own standing (while still fucking Sophie on the side). So she says no, and he gets like, really offended. He then proceeds to repeatedly sexually harass her at her place of work and blackmail her. He does eventually sleep with her, and even though in the society of the time he "ruined" her for a respectable marriage, he still won't marry her. Eventually he discovers that she was the ~mistery lady~ he met at a party years ago and left a glove with him, whom he was apparently pining for while fucking the serving girl anyways; it's a happy ending, if you call getting married to the guy who threated to throw you in jail if you didn't have sex with him a happy ending. 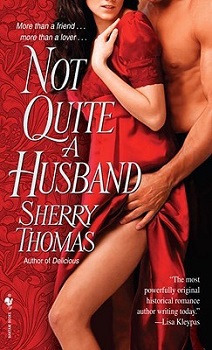 Not Quite a Husband (Sherry Thomas, 2009) - "Wife isn't keen on sex with cheating husband; he proceeds to regularly rape her while she's asleep"

This book won the Romance Writers of America Award for Best Historical Romance in 2010. Leo is going to marry a lady doctor, Bryony, whom he claims he loves. But his fragile masculinity is threatened by her being smart, so he has a brilliant idea: to fuck someone else the day before the wedding. Bryony sees him, but doesn't say anything. She's disappointed that he's a fuckboy but still marries him. She sleeps with him, but can't enjoy sex with her husband and is kinda cold in bed because, obviously, she thinks he's a douchebag. And he's like wahhhhh I'm such a nice guy, why is my wife so frigid!! Solution: sleep rape. Oh you read that right. He starts coming into her room in the middle of the night and raping her while she's asleep. She only realizes it when she's woken up by the rape one night, and she's like CAN YOU NOT RAPE ME WHILE I'M ASLEEP PLEASE. And our romantic hero does NOT get it at all - UM, why are you making such an unreasonable request? I'm a NICE GUY let me rape you in your sleep! So the next night he goes and rapes her again as a punishment for crazy talk. And Bryony is like SERIOUSLY, STOP. And he does it again. "And on it went. Until she couldn’t go to sleep for fear of what he would do to her that night. What he would make her do. Until she almost killed a patient because she was so under-rested and distraught. That evening she went home, bolted all the doors to her chamber, and never let him into her bed again for as long as they lived under the same roof".

She gets an annullment and gets the fuck away from him. He gets very angry because he's such a nice guy and he bought her a microscope once!!! Ungrateful bitch!!! So a couple of years later he tracks her down and he's still angry. She finally confesses that she saw him cheating on her, he gives her a half-assed apology. So now they're cool and they get together again because ~true love~ 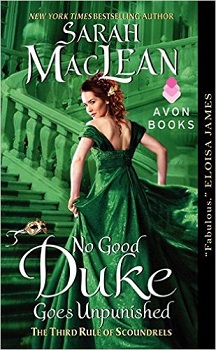 No Good Duke Goes Unpunished (Sarah MacLean, 2013) - "Woman frames random man for her own murder, ruins his life, comes back 12 years later to ruin whatever he managed to rebuild during that time. He really wants to bone her though"

Winner of the Romance Writers of America Award for Best Historical Romance, this one turns the tables and has the heroine, not the hero, be a fucking psychopath, because #equality. Mara wanted to escape an unwanted marriage, so she fakes her own death, framing a guy for murder Gone Girl-style, with lots of blood and everything (not even the guy she was going to marry!), and then runs away. She ruined his fucking life!!!! Everyone calls him the Killer Duke, he loses everything, his family is blackballed from society and he has to go into exile. And because he can't remember that night since she drugged him, he actually thinks he's a killer.

But wait! There's more! Twelve years later, this Regency Amy Dunne is back. She wants him to forgive her brother's massive debt to him, in exchange for her revealing to society that she was alive and well all along. "A fair trade", she calls it. But... she is literally asking for a massive pay-out in exchange for something she owes him. She drugs him again. She challenges him to a boxing duel so that if he wins, he's a woman beater, but if he loses, he lost to a girl. She lets her brother stab him in the chest. It's a mess!

What's the most horrifying thing you've come across in a romance novel, ONTD?