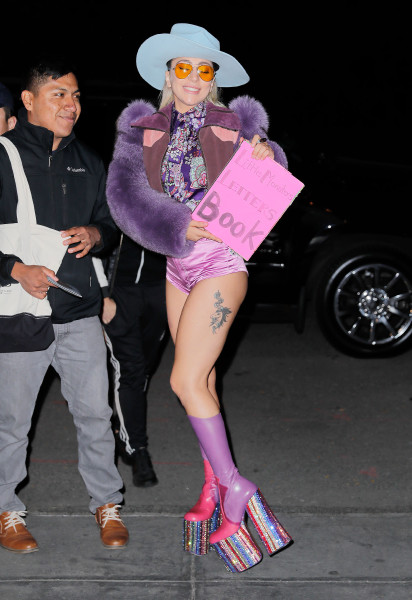 UHQ PHOTOS: Lady Gaga out and about in NYC (Oct. 22) https://t.co/KVyJmcLd7m pic.twitter.com/ZNGht8i5Vb

Lady Gaga teared up as she explained the meaning behind "Grigio Girls," a track on the deluxe version of her new album Joanne. The song, written in collaboration with country songwriter Hillary Lindsey, is about Sonja Dunham, Gaga's longtime friend and creative director at the Haus of Gaga, who is fighting stage four cancer.

"One of my best friends, Sonja, who has been with me since I was twenty-three years old, she has metastasized cancer in her lungs and in her brain," Gaga told Radio.com. "It's stage four. And it's really hard: it's hard to watch, it's hard to witness, it's hard to know what to say. But I love her so much, and it's so important that we continue to do research to find a cure."

She continued: "I wrote a song about her on the album, and it's about how me and all of our girlfriends would get together and cry without her when she's not around. Because we love her so much and we just want to be strong with her. The lyric is, 'Sisters never pack up, we always run back, love/Seven years ago I said you'd make it Sonja, was Joanne's friend, tough girl's on the mend, so when I'm feeling small, I toss that cork, and call.'"

Her advice to anyone battling cancer is to use Sonja's fight as an inspiration.

"I have watched her fight every day, trying to laugh, and go every moment with the biggest smile on her face of hope and faith for the future," she said. "Putting all of your mind, and body, and soul, into a place where you can envision your health and envision as you get stronger that you're killing the cancer with your own power and your own sense of immunity. And just know that you're so not by yourself and there are so many people that love you and I feel connected to you, even though I don't know you, because I know her. I'll be thinking about you."

The video is part of CBS Radio's web series, "Survivor Stories," where breast cancer survivors, or their friends and family members, talk about their battle.

Gaga learned from us pic.twitter.com/sa1rEYIDKu