The Best Celebrity Twitter Reactions to the Third Presidential Debate 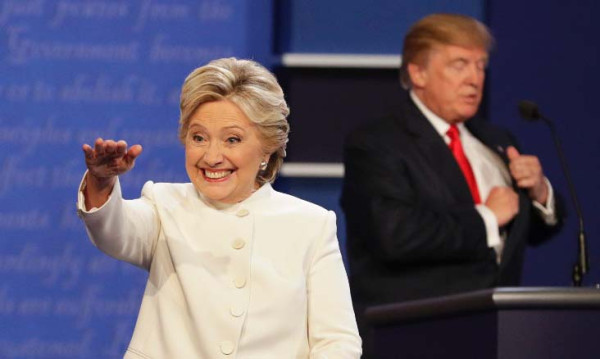 This third debate is about as necessary as The Hangover 3.

Debate Fact: As moderator, Wallace can make the candidates talk about whatever he wants but has chosen to focus on the 2016 election

Not the one I thought would be wearing a white power suit. #debate

If you don't understand the vagina, don't govern the vagina. #debate #VaginaEducation #shutup

I can't watch the debate but I heard Trump just mentioned these guys? pic.twitter.com/4twlwptCN3

"Sir?...sir?" Chris Wallace is talking to Trump the way a bouncer talks to a violent drunk at a bar. #debates

I have laughed so hard at this over the last 10 minutes that I felt the urge to share. pic.twitter.com/z9lYT56coc

"On the day I was in the Situation Room helping to bring Bin Laden to justice, you were hosting the Celebrity Apprentice." #debatenight pic.twitter.com/HmSmyq2MhR

'I've developed so many friends.'

Literally, Chris Wallace just asked, "You're going to lose, Donald. We all know it -- can you be cool about it?" #debates

"Nobody respects women more than me, you nasty woman." Huh.

Trump: "A vote for her is a vote for four more years of Barack Obama." Best. Reason. To. Vote. Ever.

What'sTrump gonna do when he loses, doesn't concede election? a) throw a tantrum b) get in child's pose c) suck his thumb d) grope a woman.

"I didn't know there was going to be a pop quiz" pic.twitter.com/yHEWmYFj8S

Congratulations, America. We survived these 3 debates w/o dying or killing anyone. Take a deep breath. If that doesn't work, a deep gulp.