Leaked Private Pics of Hendall Be Damned... Larry is Real

For Larries, everything is one big conspiracy and the leaked private pictures of Hendall during their iconic St. Barts vacation last January is no exception. They believe that the hacking of Harry's mum's ICloud was staged. Case in point:

This is the second part to the PR stunt, hope you're enjoying the photos courtesy of Mr Jeff Azoff. - I

They also flooded the hacker's Twitter timeline with hate, not for invading the privacy of Harry's family but for being an ANTI and not releasing Larry pics.

The hacker decided to set the record straight and had this to say about Larry: 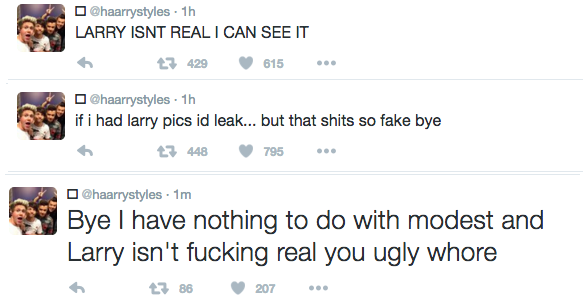 It, of course, didn't stop the Larries from insisting that Larry is real and they have proof.


The Sun had an article about the hack five hours before it happened? pic.twitter.com/rAru8bKorM

are those the twins? or lottie?

IS THAT A LARRY SELFIE I SEE pic.twitter.com/qL6TmrESEF


Other Larries didn't even need receipts to keep the faith.

@haarrystyles We don't need any Harry and Louis selfies to prove Larry is real. bye.

If you are having doubt on Larry bc of the leaked pictures let me remind you that Louis got the dagger.