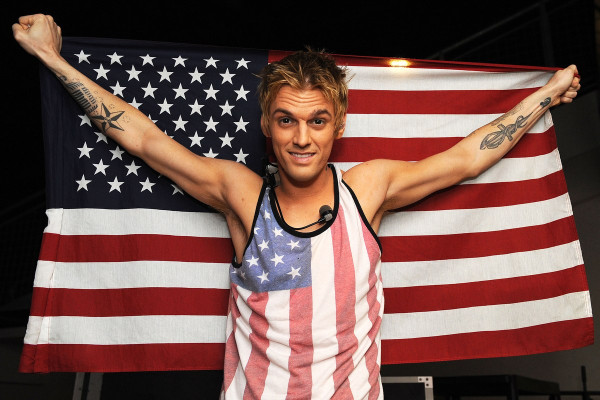 "A few weeks ago, voice of the nation, Aaron Carter announced his support for Donald Trump." In this interview he defends himself and why he is choosing a piece of human garbage for president.

GQ: So are you kind of stressed right now?
Aaron Carter: Am I stressed? Hell yeah, I’m stressed.
GQ: Did you know that this tweet would get you a lot of attention?
Aaron Carter: It was more than just a tweet, I guess. I support Donald Trump. I don’t support every little thing. Trump goes his own way. He’s a leader, not a follower, and he’s proven that by humbling the other campaigns. I think in regards to him becoming president, well, the electoral college will be the decider.

GQ: So what elements of his platform do you not support, and when do those things outweigh what you do support?
Aaron Carter: I don’t agree with banning gay marriage. It’s outlandish, because he has supported the gay community before. And building a wall is totally outrageous.

GQ: But the things you do agree with are more important than his stance on immigration or gay marriage?
Aaron Carter: Well, I mean, there’s still time to see how it works out. And I haven’t even made my vote. If Trump can’t change some of his ways of thinking, then I’m just going to sit this one out.
GQ: Have you voted before?
Aaron Carter: No. This is the first time I’ve ever really engaged in politics. (WELL THANK GOODNESS)

GQ: What made you so interested in the election this time around?
Aaron Carter: I mean, recently I’ve been rebuilding my life, I’ve been rebuilding my image and career. I went from five years ago making $30,000 a year doing the off-Broadway production Fantasticks to the next year getting back on my feet, proving myself, and grossing over $1.5 million that year. Everyone thought I was broke, but I actually haven’t been broke. There have been a lot of things people don’t understand about my story. So I kind of just find myself being able to relate. I like what he’s doing for taxes for the people. And I like what he’s focused on. Like, let’s worry about our deficit right now. And about our country. And about how we can actually make it great again. He’s proving that sometimes you have to file for bankruptcy and rebuild. I can relate. I’ve been through it.

GQ: Have you ever gone through this kind of bullying before?
Aaron Carter: Of course. I told people earlier this year that Michael Jackson passed a torch to me. Because he did. People in Michael Jackson’s camp, you can interview them and they will tell you that he did. They will tell you that. I was passed the torch, in how to treat people and what to do with my career and my life. And Michael Jackson told me he started recognizing me from when I was a little boy, because I broke his record when I was eight years old, being the youngest guy to have four singles in the Billboard charts at the same time. I broke Michael Jackson’s record for it. And I broke it with one of his songs, "One Bad Apple." And so he knew about me. He said, I watched your career. But I got bullied by all the so-called Michael Jackson fans. You guys should be ashamed of yourselves, if you’re reading this article. And Michael Jackson would be ashamed of you. Because you do the exact opposite of what he stood for.

GQ: Is there a tweet that you do regret?
Aaron Carter: I don’t regret any tweets. No.

GQ: I read that you’ve been getting some death threats. Do you worry about those?
Aaron Carter: I’m not scared. I just call them out. I shine the light on cockroaches. And you know what happens?
GQ: What?
Aaron Carter: They scatter. They scatter. Or, they try to stand their ground and it doesn’t work out for them, especially when they have, like, fourteen followers.

More at the source if you can bear it
Tags: aaron carter, politics
Subscribe