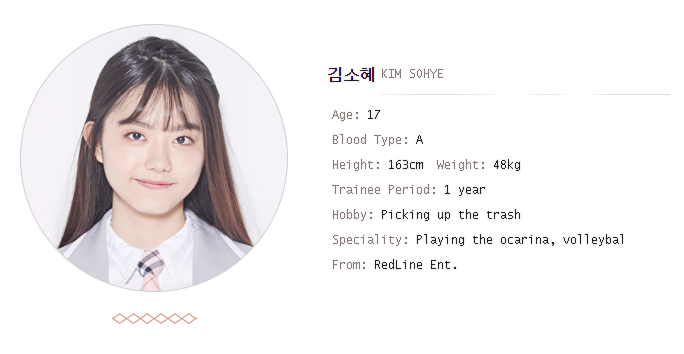 
ICYMI, produce 101 is a show where 101 girls are competing to be in an 11 member girl group
instead of having judges, contestants are ranked by the audience's votes online
one girl, kim sohye, is a cute, but extremely untalented girl who ends up on the show despite having no singing/dancing experience
sohye has been the underdog story on the show and she's  v hardworking and has shown some considerable improvement (still mediocre) making audiences love her
HOWEVER, everything changed during this recent episode where she ranked as the best dancer in her group by audience vote despite obviously being worse than the other two girls in the group. the other 2 girls (pinky and chaeyeon) also basically taught her how to dance to this as well. (the other 2 girls are also extremely popular so ppl were v upset)
after this happened, she was sent death threats online and on her instagram by crazies and the agency representing her is now saying they will prosecute anyone who sends anymore horrible threats
the korean media is also going berserk saying the show is rigged and that she gets way too much screentime for having no talent.
the channel also edited the performance to not show her mistake
the performance where she was ranked #1 is this one

she's the girl in the black with long sleeves

here's her first audition on the show


this was her ~redemption~ performance

Do you send teens death threats ONTD? Have you ever been sent death threats for having no talent? Do you think she should have been ranked higher than girls who are definitely better dancers than her?
interested in watching this iconic show that got ONTD hooked? click here
Tags: cpop / jpop / kpop
Subscribe
Previous
← Ctrl ← Alt
Next
Ctrl → Alt →
Previous
← Ctrl ← Alt
Next
Ctrl → Alt →