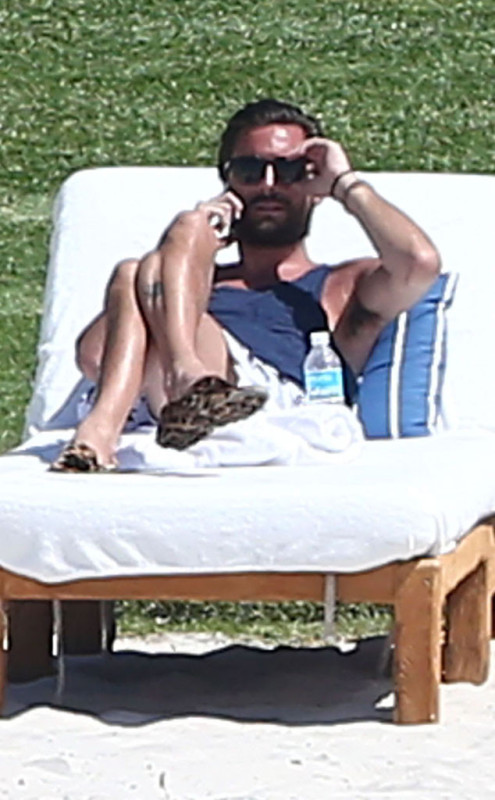 - The finely-aged 32 yr old was spotted soaking in the sun in Puerto Vallerta, Mexico
- Apparently was drinking beer + a mixed drink + a ciggy
- A source says "It's very safe to say Scott is no longer interested in recovery. He's been drinking and partying for the last several weeks. This is what he wants. This is what he's choosing. The friends he's hanging out with aren't helping."
- Kourtney cryptically tweeted about her pain or smth ("A smile hides my pain, a hug masks my heartache, and a laugh covers my tears")

Unffffffff I wish I was one of those models, idgaf abt his issues tbh he's still sexy. I want to lie on his chest and call him my daddy while he texts other women.
Tagged: holiday, kardashian / jenner, models, sexy

smashpumpkins21
March 6th, 2016, 12:45 pm
it's weird to me that Kourtney kept wanting to have kids with him. I get that she loves being pregnant/being a mom, and she probably looks at him like "welp, he's there. He'll do". But really? Idk the exact timeline, but it seemed like they always had problems and he freaked out when she was pregnant again. Idk idk.

camila12j
March 6th, 2016, 03:25 pm
I honestly think she doesn't care she just wanted the same father for her kids. She clearly loves being a mom so she is doing what's best for her, it's not like she can't take care of them she's rich. having the father around isn't an issue for her I guess..or maybe that's how rich people live? lol who knows

it's sad that he's not interested on his recovery anymore tho

chocobeans
March 6th, 2016, 02:45 pm
I wonder if Kourtney would've stayed with him if she never got pregnant or if she decided to go through with the abortion.

mrowmrowmrow
March 6th, 2016, 03:15 pm
Can I just rant for a min? A friend of mine just died due to drug/alcohol addiction, and their death made me wish I hadn't just been like 'well this is what they chose, time to move on and get their stress out of my life.' I feel a weird guilt for not putting up with their shit a little bit better and really kind of laying into them about living a normal life.

That being said, I think someone (who isn't sensitive to the asshole behavior addicts often have) needs to plant themselves up Scott's ass about recovering before he kills himself inadvertently with this shit. Addicts are generally terrible to people who want to help them (since those people block them from what they 'need') but someone needs to just take the brunt here, esp. since Scott has kids. It comes off as though Kourtney always keeps that ball in his court, like 'you decide Scott, you decide, if you love us you'll stick around and change!' Like...it's not that easy for someone with addiction, especially someone with addiction who is grieving. Someone needs to fucking care enough about this idiot to almost force him to get his shit together before it's too late.

camila12j
March 6th, 2016, 03:32 pm
Sorry hon <3 it's hard dealing with an addict..you need to be really patient and strong otherwise you can go crazy, I don't blame you for putting yourself first. I don't think we REALLY know what's going behind the scenes and I don't blame Kourtney for saying stuff like "he needs to want it and dod something about it" because she's right, but I have a feeling he feels super alone and depressed and need someone to try harder for him, same with Rob. It's sad he lost both of his parents because I think their family can't handle being there for each other. you can see it in the way they treat Kylie or how Cat treated her children, all they care about is making headlines and money :/

This disease is really awful. It takes away everything and everyone you've ever loved, sometimes quickly, sometimes slowly. Scott likely does not have anyone around him right now that will force him to look at himself, he probably likes it that way. When I got sober, I was at an "emotional bottom" but life still looked somewhat normal (although just barely) still, I couldn't go on anymore. I didn't even have the will to kill myself, I was ready to die for my disease, I literally couldn't see a way out. I knew I was an addict/alcoholic long before but hitting that kind of bottom did it for me. Outside factors didn't matter, in my soul I was done. Scott will likely have to reach that point. His family can love him from a distance but at this point, their support may only enable.

fimh
March 7th, 2016, 12:17 am
scott has been to lots of rehabs. he knows his addiction is killing him, i'm sure of it. he knows he needs to get serious. but he just doesnt want to. until he wants to do it nothing ANYONE can do will help. the kardashians should be more serious about cutting him off and not enabling him, though.

coutureable
March 6th, 2016, 07:11 pm
The thing about Scott that I don't understand is that they keep pointing to his "addiction" (I say that because I think he's really mental ill than anything) and not addressing the fact that he is clearly depressed and has other personality issues/mental health issues. Sure, he definitely drinks too much and parties too much but his recent phone call to Khloe lends me to believe he is severely depressed and goes back to partying to cope/redirect his feelings. I just want to know if any of them have ever pushed him to seek treatment or go to counseling for this. He seems to always be in rehab and I mean you'll never get the addict to stop being addicted until you get to the root of their problems.

fimh
March 7th, 2016, 12:19 am
you cant fix any mental health problems until the addiction issues are sorted out. he doesnt have an "addiction" he has an addiction. he needs to get sober and then he can work on what is going on. most rehabs these days deal with dual diagnoses, especially the very fancy ones he is going to. the bottom line is scott doesnt seem to want to get sober, so he isnt.

dionysusandpan
March 6th, 2016, 07:53 pm
Ah, that's really unfortunate about him not wanting to get help. But you can only help someone so far. I hope he kind of gets his act together at one point because I lost my dad due to alcoholism. That shit sucks for everyone.

megisthesex
March 7th, 2016, 12:05 am
kourtney has seemed so full of life since they broke up tbh. it has to be painful bc he is the father of her kids and its really sad he isn't there for them, he'll live (hopefully) to regret that.
←
→