Your Fave is Formulaic; Hollywood has fewer 'Winning' Big Films


WARNER BROTHERS: Creutz is concerned about the company’s broad slate of 18 films for 2016, though he expressed some optimism for “likely success” in a new entry in the “Harry Potter” franchise and the kickoff of a two-film-a-year series of DC Comic films, beginning this month with “Batman vs. Superman.” A drag on performance could come from mid-budgeted films like “The Nice Guys,” “Central Intelligence,” “Sully,” “Storks,” “The Accountant” and “Collateral Beauty.” If the DC films underperform, he said, “then results could be very disappointing.”

DISNEY: He calls the studio “the lead dog” and sees likely “outsized hits” in “Captain America: Civil War,” “Finding Dory” and “Star Wars: Rogue One.” But even the industry leader will face stiff competition with April’s “The Jungle Book” and its July distribution of “The BFG” for DreamWorks. Despite huge performance, Creutz worries “that investors are capitalizing what in retrospect may prove to be peak studio margins at a very high multiple.”

Who is suprised? Anyone?
Tagged: box office

ohprecioustime
March 5th, 2016, 12:01 am
i feel like the internet has made things so polar when it comes to media, like either you are huge or a nobody

sandstorm
March 5th, 2016, 12:04 am
I think that's true for media but not necessarily for the people. There is really the death of the 'movie star'. people who aren't like us, you ask them and they'll still say brad pitt is a movie star. They're ten, twelve years behind.

josiefier
March 5th, 2016, 12:08 am
Idk if it's just because of the internet, but TV has become the same way. Twenty years ago a show could still be allowed to find its footing, be moved around to different time slots until it found one that maybe fit. These days, with most channels/shows, if you're not a hit by episode two you're cancelled then and there. Or on the other side, if so much money has been put into a show, a second season could be greenlit before the show even airs just in the hope they'll break even.

ilovemyatari
March 5th, 2016, 07:05 pm
Really? I'd say it's the opposite for TV. Shows like Firefly and Freaks and Geeks would be more likely to last longer today than they would when they premiered. I think networks aren't as quick to cancel (the flip side is they'll also keep trash around for a lot longer.) 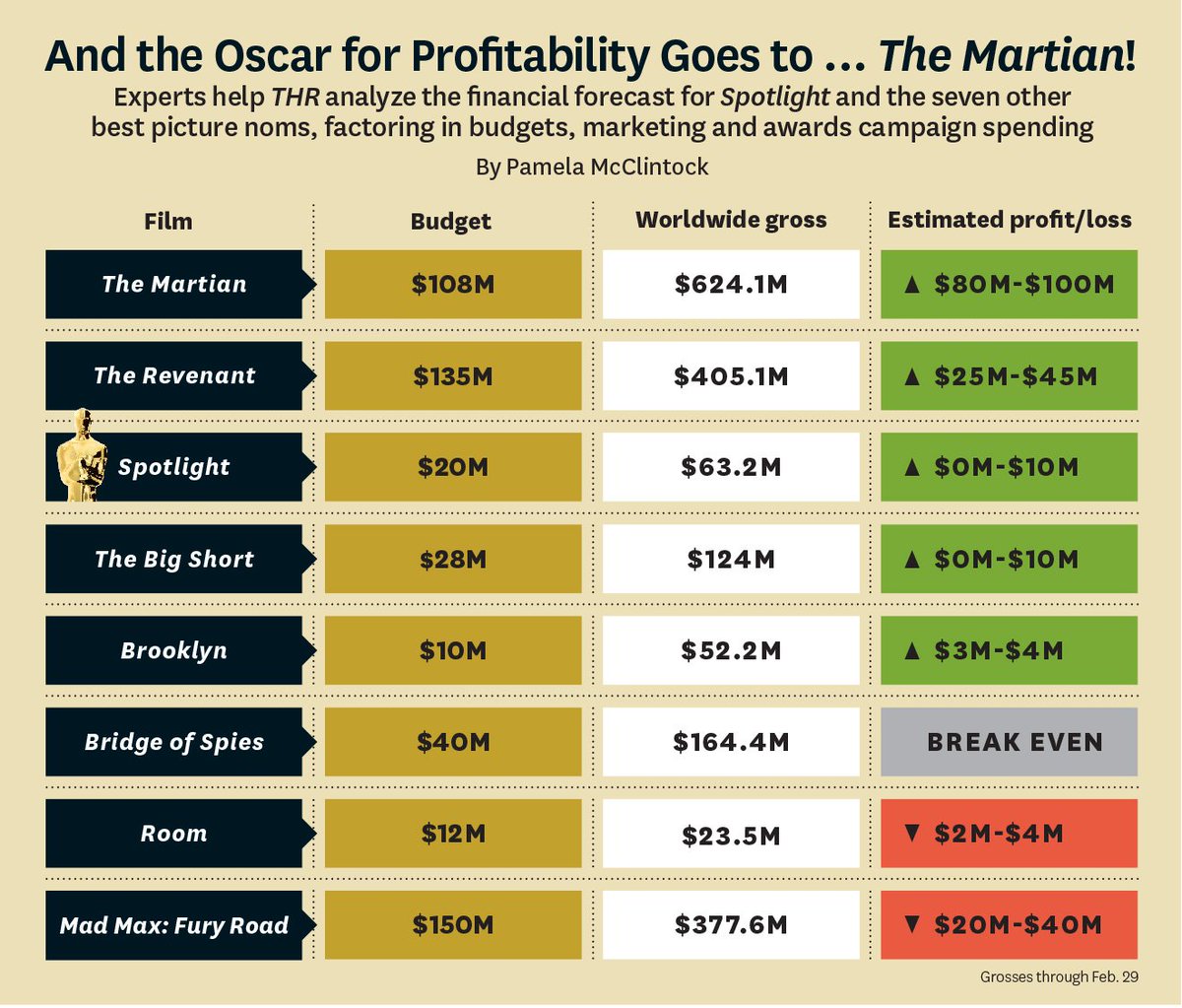 300psychosis
March 5th, 2016, 12:23 am
I have a question regarding that chart. If a movie makes significantly more than it's budget but still has a loss (like Mad Max), is that a result of the money spent on marketing and campaigning?

musicnkisses
March 5th, 2016, 12:38 am
A movie has to double it's budget to break even + the cost of marketing that's not factored in, theatre cuts, etc.
A studio might write a movie off as a flop too, for tax purposes I believe.
(no subject) -

musicnkisses
March 5th, 2016, 12:41 am
So basically, Mad Max getting a sequel is the equivalent of CW renewing their floppy shows? Like, I hope they can recoup that $40 million lose but it's unlikely.
(no subject) -

burntbussy
March 5th, 2016, 12:08 am
i've never really liked blockbusters and i especially don't like these superhero movies. ontd always rages when there's the slightest hint of criticism against them though lol

sandstorm
March 5th, 2016, 12:09 am
Right? "I expected the _____ hate!" lol you pretend to be high and mighty about subjective tastes ok. There's a huge difference between needless bashing and just "this was a problem / not my thing"

burntbussy
March 5th, 2016, 12:17 am
i just wish studios would fund and promote less huge budget, flashy movies since that's not what i really want out of movies generally. i don't think it's unreasonable to say such movies affect the hollywood ecosystem either.

euraylie
March 5th, 2016, 12:11 am
I'm not against superhero movies on principle, but the last crop has been less than stellar and I'm tired of these one-dimensional good vs evil scenarios.
(no subject) -

meow_tan
March 5th, 2016, 12:38 am
I love blockbusters and superhero movies, but I can understand why people don't like them and how they can get annoying. I don't fault anyone for not liking them.

cloudsnberries
March 5th, 2016, 12:58 am
i hate them too ugh i only watched half of the avengers and that was the last straw

iamtheliquorr
March 5th, 2016, 01:04 am
mte I'm super bored with all these superhero movies

korralin
March 5th, 2016, 01:44 am
I hate superhero movies, I used to love the OG spiderman but this is fucking overkill

josiefier
March 5th, 2016, 12:21 am
I don't remember the last summer blockbuster I cared about tbh. Maybe the Star Trek reboot.

meow_tan
March 5th, 2016, 12:41 am
I exclusively see blockbusters because I like seeing movies in huge crowds with friends so I'm part of the problem.

Movie tickets are so expensive now, people only see movies when they're really, really sure they are going to enjoy something. And when they do see something they like it, they'll see it in IMAX 3D, and they'll see it multiple times.

veritasaequ1tas
March 5th, 2016, 01:58 am
same. seeing an action movie in theatres surrounded by a bunch of people really can't compare to watching it at home. like, i watched gravity in imax 3d and was raving about how great it was for days, then i tried watching it at home and practically fell asleep lol.

yoshiyuki_ly
March 5th, 2016, 12:42 am
I've only wanted to see a few movies in the actual theater: Selma, Lucy, Black Swan and The Dark Knight. The rest of the movies I've liked, I either didn't hear about them until they were already on blu-ray, or I couldn't be bothered to go to the movies to see them.

piratesswoop
March 5th, 2016, 12:42 am
i feel like films lately aren't really as iconic as they used to be either. just look at the best picture winners AND nominees from the 70s, 80s, 90s. they're full of films that were immediate cultural phenomenon. i mean think of how everyone was quoting forrest gump or silence of the lambs or titanic when they came out. i can't think of any culturally relevant movies like that now. so many of the films that have won or been nominated in the last few years have either been blatant yet forgettable oscar bait or good films but with no real staying power.

musicnkisses
March 5th, 2016, 12:55 am
I think WoWS, 12YAS, Django, TSN and few others will stand the time of time, good or bad. Like, there was Oscar Bait back in those times too.

piratesswoop
March 5th, 2016, 02:34 am
i mean there has definitely always been oscar bait, but even so, these movies were still resonating with audiences, and managed to be successfully not only at the box office nine times out of ten, but had greater cultural impact. i mean, facebook has had a massive impact on society, but i really don't see the social network being a huge part of that. i'm sure django will be remembered, but that's more because it's a tarantino film. i think it lacks the immediate impact that kill bill and pulp fiction had.

winegums
March 5th, 2016, 03:40 am
ikr, like who the fuck cares about Forrest Gump now? The main one anyone remembers from that year is prob Pulp Fiction. Which didn't win.

lalaloopsy98
March 5th, 2016, 12:57 am
IA, no best picture winners have stood out within the past 5-10 years (maybe 12YAS, but only in schools/as an educational tool). Birdman is what people consider very 'original' nowadays, and even that has had no cultural impact whatsoever.

This year was particularly weak.

I've certainly heard one or two references to "Witness me" or "Mediocre" but then again... I also hang out with nerds so

beating_heartss
March 5th, 2016, 10:52 pm
That's because back then only a handful of movies would be released a month but now you have 20 to 30 theatrical releases in one single weekend. This leads to a movie being in theaters only for two to three weeks when movies back then were in theaters for at least a year so eventually lots of people saw it because it was the only thing in the theater to watch.

korralin
March 5th, 2016, 01:31 am
I saw the avengers when it came out idk why and it was just this long ass hellish time, I had no idea what was going on and I didn't care

maishi_obuki
March 5th, 2016, 11:07 am
Mission Impossible would have been the better choice. I say this as a comics and superhero movie fan.

sadmagikarp
March 5th, 2016, 01:42 am
the death of the mid budget movie is so sad. movies clueless or pulp fiction or clerks can't get made anymore cause it's either indies made for a million or some bullshit studio tentpole movie made for 100 million plus

marvel movies and the ppl who stan them are so stupid. eating up that mediocre shit like a bunch of fat kids at a candy shop

should
March 5th, 2016, 09:26 am
yeah I've actually been wondering about this, like teen movies(minus disney originals)/rom coms/dramas that aren't historical or by david o russel seem like they're just not getting made anymore

jason_voorhees
March 5th, 2016, 01:46 am
Movies have become prohibitively expensive, so only blockbusters are having any impact on box office because they're "events" that make you feel like you got your money's worth.

This is squeezing out small budget films and preventing new franchises and new leading men/women from being created.

euraylie
March 5th, 2016, 01:51 am
I have a feeling the new HP movie is going to disappoint WB's expectations.
It's going to make money, no doubt, but I don't think it's going to be a beloved hit (just going by the terrible teaser and plot synopsis)

arilicious
March 5th, 2016, 03:24 am
I feel like almost every movie is like this, everything is all superheroes and sci-fi and special effects, it's boring. Plus everything is a sequel or remake, I'm so sick of it.
People will just see anything and say it's great even if it's shit.

muzicnem
March 5th, 2016, 09:52 am
This. People's standards have gotten so fucking low. They're sacrificing a truly good story for something shiny that blows up.

prophecypro
March 5th, 2016, 12:04 pm
They've cannibalized their own portfolio with IMAX 3D franchise films getting the most screens